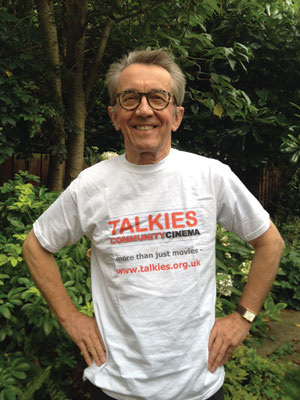 It’s been home to both blockbusters and film legends, and cinema lovers in Enfield even commission their own films to celebrate the borough and its cinematic heritage.

Both Boris Karloff, most famous for his role as Frankenstein’s monster, and the current kingpin of British cinema Ray Winstone, were raised in Enfield, while the borough has also been a backdrop for cult classics such as Secrets and Lies and Quadrophenia as well as Hollywood blockbusters such as Jack Ryan: Shadow Recruit.

Talkies Community Cinema, currently based in Palmers Green, Southgate and Enfield, is the not-for-profit organisation behind commissioning the independent films and its founder David Williamson, is keen to explain why film and Enfield go hand in hand.

“People have to live somewhere and Enfield happens to be the place where the film talent of London lives. There is an idea that the suburbs are a bad thing but the reality is most people live in the suburbs and we should be celebrating that.

“We aren’t the West End, we aren’t Shoreditch or the South Bank but we are where most of the people in the film industry live – the suburbs.”

Talkies Community Cinema works hard to celebrate the film stars, directors and other film workers who come from the borough, whether they be producers, marketing officers or script writers, at its annual ‘Here’ Film Festival. They also screen a range of independent and specialist films throughout the year at a range of venues.

It evolved from a group of 13 friends who set up a film club combining food and movies once a month, but really took off after David retired and decided to bring great independent and specialist film to a wider audience.

“We had a great time over 12 years – we saw more than 120 films, and we thought ‘I wonder if this would work on a bigger scale’. 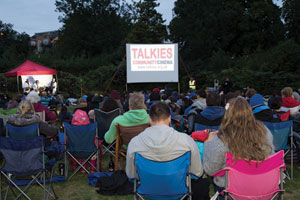 “The first screening we did, we had 35 people turn up and our biggest audience was 400 people when we screened Ghostbusters in a park.

“We’re always surprised when people turn up, but they do. There is a tremendous appetite for something that’s not Hollywood and that’s an important part of what we do.

“All the films we show during the Here Film Festival have an association with Enfield in celebrating the talent we have locally. There are a lot of people from Enfield who have become directors, actors or producers.”

Fans of Hollywood blockbusters and more mainstream films are also catered for at venues including: